skip to main | skip to sidebar

I know it has been forever but I thought I'd better at least do a little post today. Dawson started preschool today! He was so excited to go to school, back in March when we took a little tour of the school and got signed up, Dawson wanted to stay and go to school back then so he has been looking forward to this for months. Whenever we would drive past the school he would point it out and ask when he got to go so I'm glad he had a fun day today. When I went to pick him up he was very excited to tell me about his new friends and the fun things they did and the stuff that he had learned. I am so glad he was so excited about it, I think that when the time comes for Jordan to go to school he'll have a harder time, good thing his brother is setting such a good example :) 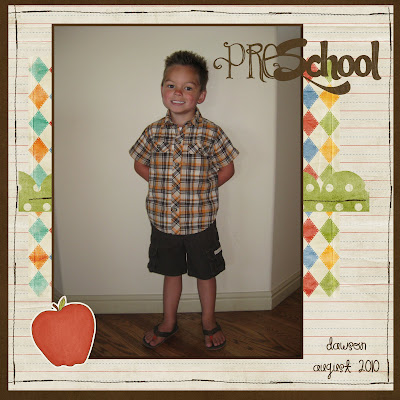 His head got hurt...

This happened a while ago but since it has been a while since a post I thought a quick story might get me blogging again :)

A few Saturday's ago Dave went downstairs to workout and I was upstairs with the boys, we had just done some shopping so I was having Dawson put some things away for me. I had bought a wreath for the front door and needed it put away downstairs, Dawson wanted to go say hi to Dave so I sent him down with the wreath and told him where to put it.

Dave didn't hear Dawson come down and Dawson went into a room where he thought I wanted the wreath to go. Dave had a pull up bar hanging in that door frame while he was lifting weights in the other room. As Dawson left the room he tried to close the door, which he could not do with the pull up bar in the way. So he was banging the door hard enough that the pull up bar came off the door frame and RIGHT onto the top of his head. Dave had heard the banging and then crying so he ran in to see Dawson, when Dawson didn't stop after a little while I went down to see what happened. Dave was giving Dawson a hug saying he was ok and Dawson was holding his head. I asked Dawson if he was ok and then he slid his hand down his face, and that is when Dave and I saw the blood. As he slid his hand down his face he also smeared blood down his face. I knew that heads bleed a lot so I wasn't super worried when I saw the blood, we just took him upstairs so we could clean him up and check out the damage. 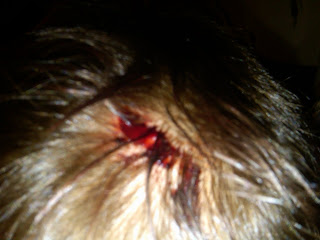 After cleaning it up we could tell that it was something that might need to be looked at. It wasn't a very big cut but it looked deep and had some white stuff coming out. Dave grabbed a towel and took Dawson to InstaCare, the first one they went to was closed so they had to go to a farther one and on the way Dawson fell asleep :) 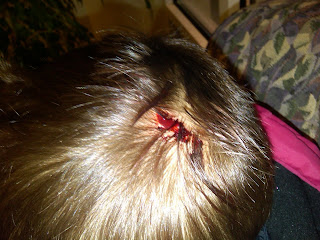 They first cleaned the cut and decided that he would need staples, Dawson really didn't want any shots so they had Dave hold a sponge with something to numb it (Dave said it didn't seem to work that well). He got staples with a little bit of crying but it was all made better with the bouncy ball they gave him :) 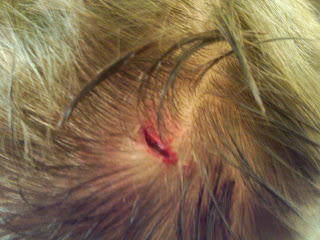 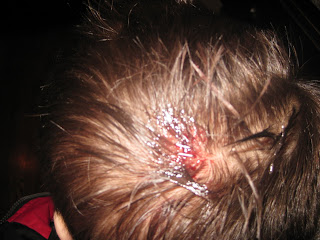 When he got home the first thing he said to me was "Hi Mom! I'm all better, I have staples." I just had to take a picture of him when he got home he looked so worn out. By the next day he was back to jumping around and showing me his somersaults, and I had to keep telling him to stop doing them or he would hurt his head more. 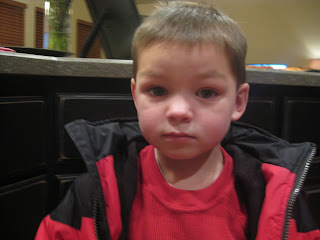 The next hard part was taking the staples out, after the first one was taken out and he realized how much it hurt. I had to hold him down with all my weight (he is a strong kid!) while the Dr. took out the other one. All he has to show for it now it a small purple line on the top of his head, but he does like to tell you the story. 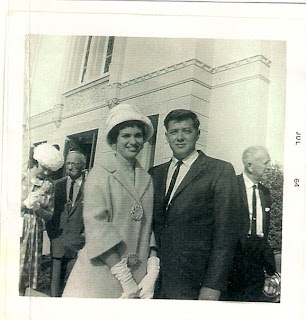 Wow, already 4 years since my Grandma Janet suddenly passed, time has gone so fast. Last year I made a post about the day that she died and this year I have thought about all that has happened since she has been gone. Because I lived near my grandma most of my life I was close to her, she seemed to always have something to say about who I was dating, what I was wearing, and what I was doing, it was fun to hear her opinion and I was glad she wanted to be involed in my life. I glad she cared enough to ask :) Now that I have two kids I wonder what she would say about them, I think of telling her the funny things that they say and do and think of how she would react. I know she would be really proud to show off her great grandkids! I think that Dawson and Jordan would have fun hanging out and getting to know her, she was always fun to talk and laugh with. Miss you Grandma!
By the way isn't she SO cute in that picture with my grandpa! 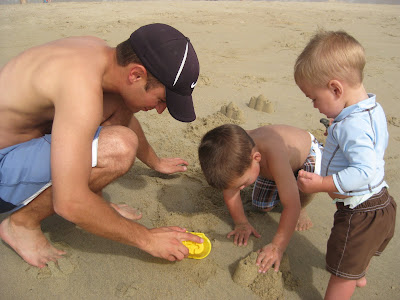 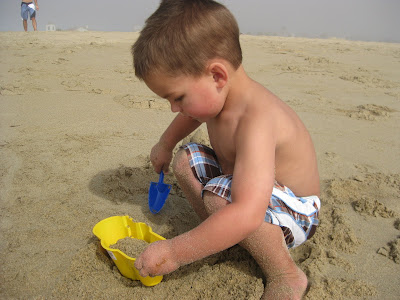 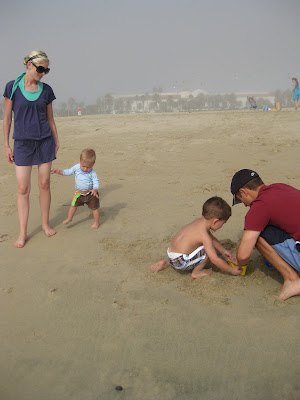 They both LOVED the beach, Dawson loved chasing and running from the waves and loved making a sandcastle. Jordan really surprised me on how much he liked the ocean, he loved the water and keep trying to walk into it. It was not warm water either!

Where do I even begin? 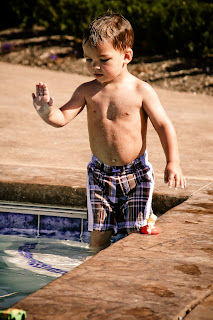 We had a fun summer; Dawson took swim lessons almost the entire summer. At first he wasn't so sure about learning to swim but after a while he warmed up to it and really enjoyed his lessons. During the winter he has been laying a blue blanket on the floor and showing me how he can dive, blow bubbles, and swim in the water, we will be doing swim lessons again this summer for sure! We also enjoyed many lunches at the park, Dawson will ask to go eat lunch at the park every so often now but I remind him the we will freeze outside during the winter so we have to eat lunch inside. 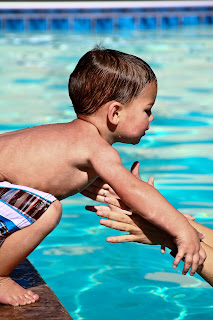 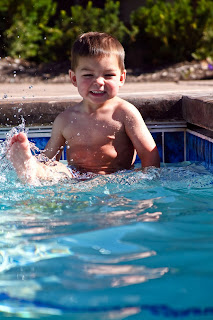 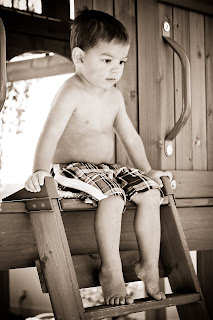 In July my brother Tyler got home from his mission, my parents and other brother went to Hong Kong to go pick him up. It has been so fun to have him home! 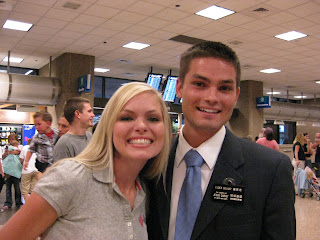 Of course there was a lot of golfing in the summer then in August my 26th birthday. Dave and I went up to Park City for the night and had a great dinner and went to a movie. A few days later we had our four year anniversary! 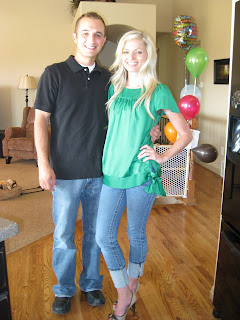 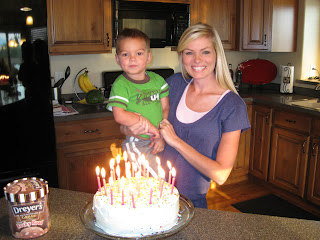 Jordan started walking in Sept. around 10 months and now speeds around the house like a pro. He follows Dawson everywhere, and gets into EVERYTHING. In October we went on a trip to Huntington Beach Cali. with Dave's family, we went to Disneyland, the beach and did some shopping. The boys had a blast. Just driving into the Disney parking lot Dawson saw a kid wearing a goofy hat and yelled "I see goofy!!" haha It was even better when we got inside and he got to meet the real characters. They loved all of it, Dawson was disappointed that he wasn't tall enough to ride the train (I think it's thunder mountain). It looked way to fast for him anyway but as we walked away from it he kept saying "but I NEED that ride!" So we had to stand on the side and watch in zoom past us a few times, we only walked away because I promised a much cooler ride. 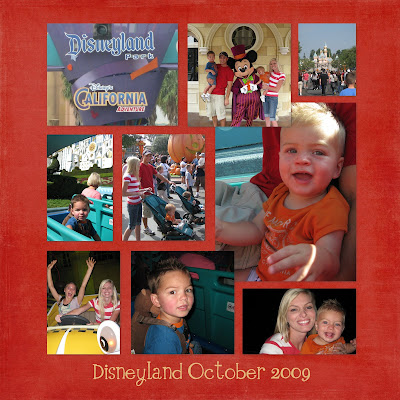 I'd love to post more and get you up to date but blogger is killing me right now! It is messing up my pictures and taking me forever to post stuff so I'll do the Nov. til now catch up later. For now this is what we have been doing!

I'm going to update my blog, for anyone that still looks at my blog :) I'll update it soon, for the first time since May! I bet your getting real excited! If your lucky it might even be later today, we'll see. 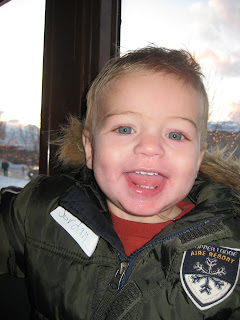 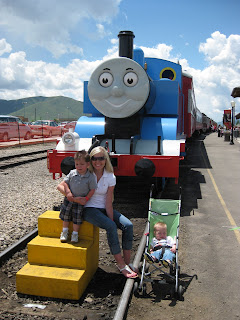 We took Dawson to Day Out with Thomas again this year and he loved it. Jordan just enjoyed being out, smiling as always :) We rode on Thomas and went through the straw maze. Dawson also got some train "tattoos" (that we called stickers), that he was showing to all the animals at the petting zoo. It is so funny how much he loves Thomas and all the other trains, he got a new book while we were there and can name every train in the book and there are A LOT of trains! The tattoos and wristband that he got stayed on his arms for over a week, everytime I asked if he wanted me to cut off the wristband for him he said "no, its nice". 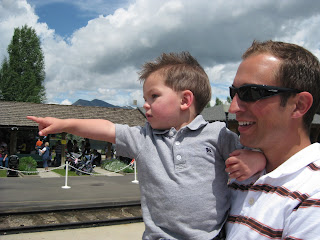 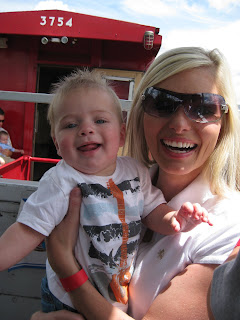 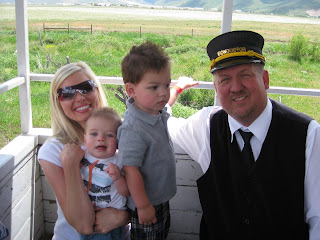 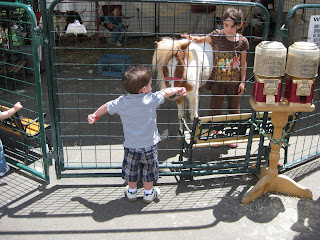 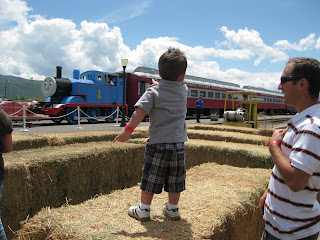 Jordan is also growing up so fast! He has two teeth and is crawling everywhere. Now that he is crawling he can get to the toys that he wants faster and that has become a problem for Dawson because it seems like the most interesting toys to Jordan are the ones that Dawson is playing with. So now I am hearing a lot of "no baby!" So Dawson is having to learn to share a lot more. Jordan doesn't seem to mind, he thinks Dawson is funny no matter what he says :) 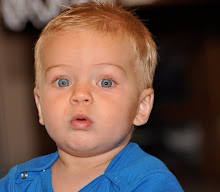